My life coach (Rebecca) and I did a little trip planning today. Intimidating, but fun! A few possible routes there were mapped, East coast ferries were explored, and loyalty programs were investigated. Apparently, you can trade your airmiles and save-on-more points for hotel vouchers. Hopefully I have enough to buy me a few nights at least. If anyone is interested in helping in this way, bring it on, it is very much appreciated. If not I’ll just sleep in my car on the side of the highway. Jokes…I think.

I have run into roadblock #1 with my trip. My understanding is that due to licensing agreements, Cystic Fibrosis Canada is not allowed to donate the DVDs to me for distribution to libraries. I could use the donated movies for distribution to individuals, but for institutional use, the cost of the DVDs is much steeper. Damn.

This leaves me at a bit of a crossroads. Anybody have any ideas/desire to raise money to buy some DVDs? Any businesses want to sponsor this event? Anyone out there want to do their own little fundraisers (bake sales, car washes, or something on a larger scale) to help buy the movies? Unfortunately, I am not in the headspace to go full tilt into the large scale fundraising for DVDs element of this project, so at this point, any help would be appreciated.

Alternatively, I had the idea to distribute the donated copies of the movies to random individuals across the country and ask them watch it, then pass it on to a friend…65 times each. Hopefully this would still raise awareness, albeit on a much smaller scale. Double damn, but at least it that, in conjunction with some media attention that is in the works, would spread the word a bit.

The plan is still to leave PR on the 20th, do Vancouver Island, then speak at the opening ceremonies for the longest game ever played on the 26th. For those of you who are unfamiliar with this event, here’s the link to check it out: http://longestgame4cf.com/ Exciting stuff. You go girls! They’re still looking for players too if any of you gals out there are interested. I’d go, but I can’t skate and am pretty sure I’d wind up breaking my arm in the first 3 minutes.

Wish me luck on this DVD thing. Email me at kirstinwhitford@yahoo.ca if you have any thoughts or ideas. Right now, the suggestion window is open!

I’ve recently decided to go on a little drive…across the country. Here’s why:

How I am going to do it:

Email transfers can be sent to kirstinwhitford@yahoo.ca (Just be sure to watch the spelling of both the first and last names. Yup, now I have the double-whammy weird name). Funds can also be deposited into Royal Bank savings account number: 5128046, transit number 08160. You need both of these numbers to make a deposit.

This info is also listed on the “How can I help?” section of the website.

Thus begins my soul searching/making things better for other people and hopefully myself mission. My fingers are crossed that this goes well; I’m excited and scared, but mostly excited. I leave home on August 20th (the day that Joey’s lung transplant finished – the operation spanned 2 days) and will be rolling back into Vancouver on October 24th (the day that Eva had her first double lung transplant)…65 days later. Weird, right? Normally I am skeptical, but I think that someone might be pulling a few strings for me. How can I say no to the J-Dub?

Pretty much sums up how both my birthday (July 17th) and the 5 month anniversary (yesterday) of Joey’s death went. I like to set the bar low for myself.

In other, more positive news, I attended another kick ass wedding for two other kick ass people. Tracy and Alex got married on the 16th. Didn’t they look fab? Or, more importantly, ecstatic: 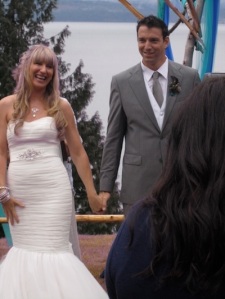 A good time was had by all. Unfortunately, I did not learn my lesson from the last wedding I attended re: the dead husband jokes, however, this time there were more people there who understand that sarcasm and maniacal laugher are my screwed up way of coping. That said, I did still manage to alienate myself from a few people. Pretty soon it’ll be a fine tuned skill. I think I redeemed myself on the dance floor…or just made it worse. Either way, J-Dub would’ve been proud.

I also finally got to meet this little darling yesterday:

Koren and Haven are here visiting from Calgary, so we hobbled over to the Shinglemill to have a post-birthday lunch. Mmm good!

Here is a summary of my July whacky adventures to date:

Attended Dallas and Darren’s wedding at the beginning of the month. The bride looked stunning, of course and the groom dashing. I discovered that making several “my husband is dead” jokes (especially ones about taxidermy) are a great way to alienate yourself from the vast majority of the people sitting at your table, even if it makes you feel less uncomfortable going to an event like this solo. I also learned that no matter how many jokes I cracked, my heart still hurt just as much when it was time to cut a rug at the end of the night.

Went camping in Pemberton with Ryan. Shockingly, I had a good time. This may have been due to the fact that we were there for the only two sunny days in July, or it may have had something to do with the fact that I was camping with someone who did all of the cooking as well as nearly all of the cleaning, set up, and take down. And who was responsible for starting, stoking, and putting out the campfire, and fetched all of the water, and who taught me how to toast a perfect marshmallow, which esentially involved me watching him toast them to perfection, then demanding they be placed into my grubby little fingers so that I could shove the entire thing into my mouth at once. Had anyone else witnessed this, I’m sure they would have deemed it a revolting spectacle and me a revolting specimen. Good thing nobody else was around.

Went to Clearwater to hug some people I love and to honor a woman who played a special part in my life. There’s nothing like a few “my mother is dead” jokes to make you feel less bad for coping with “my husband is dead” jokes. As long as I’m laughing, I’m as okay as I can be. It’s when I stop that the real hurt sets in and takes over.

Like the last few days. I got home, ran a few errands, then spent much of the last two days in a ball sobbing on the floor. On the plus side, I came pretty close to throwing my back out today, so at least I am now unable to remain in one position for an extended amount of time. Alternating crying on the floor with crying in a chair with good back support and crying while standing up really makes you miss your dead husband less.

The speeches made in her honor were amazing and genuine; just like her. Who else but Jackson could turn such a miserable occasion into something akin to a standup comedy routine, mixed with plenty of tears, of course. What an incredible person he’s grown up to be.

So that’s where I am these days; bumming around the interior again. I’ve been trying to force myself out and to be un-mopey to some degree; sometimes I am more successful at this than others. Will update with more whacky adventures when I’m feeling less miserable, but for now I’m outtie.